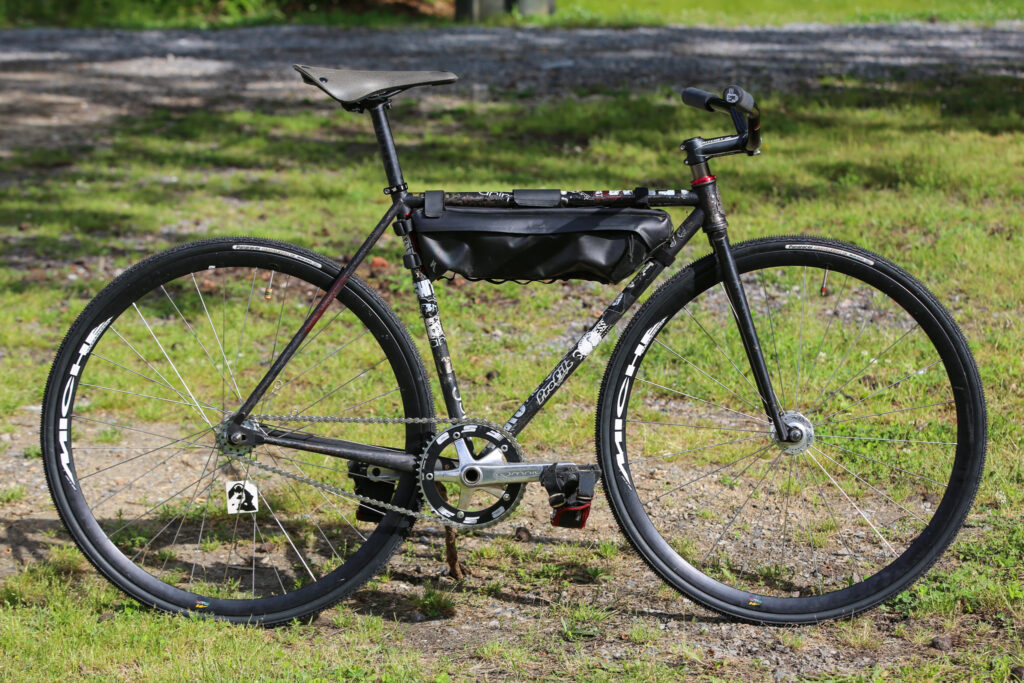 If you’ve bought a complete or had a build done by Crust in the past two or three months, it was very likely done by the newest addition to the crew, Latané. I’ve known Latané ever since I moved to Richmond a decade ago. I’ve probably spent more time riding BMX with him than any one else on this liquid soaked space rock. We’ve lived together, partied together, and now, we work together. All-in-all it’s been pretty damn good.

When we first met he was working as a bike courier and this FBM Sword was his weapon of choice to rip around the city hauling anything from a side of fries to some official government documents. For those of you who don’t know or don’t remember, a bike courier is who would deliver your artisanal beet juice when you were too hungover to breath, much less walk down to your local health foods store to buy yourself some nourishment. I’ve watched this bike transform over the years, the front rack came off, the sticker collection has grown, the coats of spray paint have added up, and the parts list has gotten better and better.

He, at one point, discovered a hole had been mysteriously punched through the side of the seat tube, and to this day has no clue how it happened. Him and our friend Big Rick patched it up using an old 1 1/8″ steerer tube that they cut in half and stick welded over top of the hole like a big ol’ external gusset. Since then he has upgraded just about every part on this bike from the Sram Omnium crank (RIP), the Miche wheelset, and most recently a Nitto X Crust Brush bar and a set of 700x28c Panaracer Gravel Kings in preparation to do some more dumb off road fixed stuff.

Bikes like this are my personal favorite. Its not some nerd fest bike with all the expensive components and not a scratch on it (although those can be fun to look at). This bike has likely never been measured in any sense using a micrometer and there isn’t a bolt on it that’s been torqued down to the exact Newton-Meter. Latané’s Sword has character, is bullet proof (besides maybe that seat tube hole), is ridden hard, and tells a story. For as long as I’ve known Latané I’ve known this bike, and I don’t imagine him ever parting ways with it.

For those of you interested in the smaller wheel diameter stuff, here’s a sick photo of Latané shot by Dillon Leeper and Latané’s most recent video part below that. Check it out!